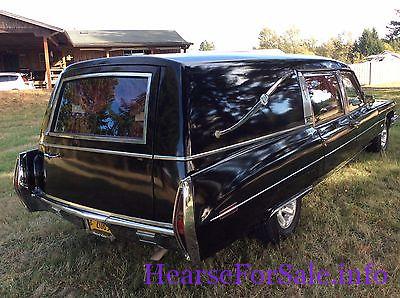 This 1973 Cadillac Miller Meteor Hearse was last seen for sale for $5999.00 in Beavercreek, Oregon.

Hearse archival, NOT for sale:

Hearses for sale now on eBay!

Whelp, the time has come to re-home my beloved 1973 Cadillac hearse. Moving to a smaller place and sadly for me I have to leave the Caddy with a new owner. Great news though, that owner could be you! Here’s the rundown on the car, it’s a lot of text but the short version is it’s a big cruiser with trivial cosmetic flaws and an awesome, professionally installed, stereo system. This is a 1973 Cadillac Hearse. The body is by Miller Meteor and is all steel with a steel top. It has been adult owned it’s entire life. All of the glass is in great shape with NO CRACKS, including the windshield. The Caddy has 96,473 miles on it which is on the high side for a hearse, but on the low side for a car built in 1973. The body is in nice shape and has NO structural rust. The frame and suspension, spring mounts, springs, etc are solid and still wears most of it’s factory black paint, the underside of the body, rockers, steel roof, water channels, bottoms of the doors, etc are all solid. This was, I believe, a California car in it’s previous life. It has no rust holes that I’ve been able to find in 9 years of ownership with one small exception, which is the lower vertical surface of the passenger side rear door. I believe moisture at some point got behind the sound deadener tar mat the factory glued to the inside of the door and it made for some small bubbles that are now showing through the paint. This is not rust in the pinch welds, curves, or seams, it’s a very odd place to have had it happen and to me, looks like it’s an easy fix. The other doors do not have this issue. It has only recently started to show, and unless you’re looking for it it’s not something you’d notice. The bottom most seam of the doors have surface rust and some pitting, but it’s not rotted through and you have to literally crawl under the car to see them. The floorpan is solid as it was when new. The paint washes up nice, but is by no means show quality and has some dings and chips here and there, namely on the back door. Please see the NOTE at the end of this write up about the back door. Originally the car was Zodiac Blue (2328), a 1971 Cadillac color and came from the factory with a crinkle painted steel top. It’s worn many different paint schemes in it’s life, some of them pretty outlandish, and now is gloss black on the top and body. The engine is a 472 cu in V8 and is in every way factory stock. It has Factory AC that needs recharged (I never did it as Oregon never gets warm enough to need it). The heater core was bypassed when I got it, I’d guess it needs replaced. It starts easy even after being in storage for a while. You’ll want a large capacity battery for this big engine. There is an exhaust leak at the manifold gasket on one side. Only one of the cylinders, and it quiets down after everything warms up. A correct set of replacement exhaust gaskets for both sides is included. It’s not the manifold itself, just the gasket. It’s not terribly cold blooded and runs smooth when it warms up. After 9 years it’s probably time to give the carb a tune up but runs okay as is. If it sits for a few months it may smoke a puff at startup but it clears right up and burns clean after a moment and won’t happen again unless it’s in storage for a long time. The alternator, exhaust, accessories and all are factory stock. The engine is not a giant grease ball like some old cars. Automatic Transmission shifts and works fine as far as I can tell. I’ve never had issues with it. Wheels are aftermarket aluminum Modern brand, with Grand Am Radial GT P235/70R15 tires. Tires have full tread, no flat spots (never parked long enough to develop them) and look nice. I drive on them and they ride nice, but they’re about 10 years old at this point. Now, about THE STEREO. The fun part about this car is that it was built in the early to mid 2000’s for a local Clear Channel radio station, Z100, and was used at their October events and a massive haunted house they sponsored every year called Screamland. I saw it when it was in service with them and thought it was just way too cool and bought it from the radio station when they decided to stop doing the haunt. I was told by the station manager that when the car was built, they traded air time for Phoenix Gold products (which used to be a Portland, Oregon company) for the equipment and install that went into the car, and the level of quality from the install shows. All of the wires, connectors, speakers, amps, fuses, etc are all Phoenix Gold brand. There are 4 Tantrum 400.4 amps in a custom built enclosure that lights up green when the stereo is on, and is housed behind a water jet cut acrylic Phoenix Gold script cover. A voltage display shows what the current battery voltage is, and a bass adjust knob is hidden by one of the pillars for turning the boom up or down. Custom speaker enclosures sit on top of the wheel well’s in the rear and in two small cabinets by the back doors. There are 4 midrange, 4 tweeters, and 6 massive 12″ subs built into the car. It sounds nice and clear and is quite the experience for a car stereo since it’s one large sub box. The stereo is not all boom, like I said, it sounds like a large stereo that is set up well by design. I…